I was first introduced to Rosetta Stone three years ago after it was recommended to me when I wanted to learn Danish in preparation for moving to Copenhagen. I was really impressed by the product and recently decided to purchase the program again to learn Greek – a language I have wanted to learn since I was a kid.

Rosetta Stone is the world’s #1 language learning software and they’ve also developed an equally amazing social media presence. They have over 2,600,000 Facebook followers, just over 90k Twitter followers and users are so engaged they often start their own discussions. So how do they do it?

They have a good base product
In order to survive in the social media world, you need the goods to back it up. Rosetta Stone’s former chief exec, Tom Adams, said it best in an interview with the Washington Post: “Set out to teach first and change people’s capabilities and then look around at technologies like speech recognition, social networking, casual gaming, all of these different things.”

Like he said, Rosetta Stone’s proven teaching methods are only enhanced by its social media presence.

Brand Consistency
A lot of companies seem to forget their social media is part of their professional appearance. Call me a snob, but if a company’s Facebook page is full of spelling and grammar mistakes, I’m out. The same goes for multiple opinions—even if there are dozens of people contributing, they all need to send out the same message. I don’t mean they all have to regurgitate the company philosophy like a bunch of robots, but they do all have to work toward a common goal.

Rosetta Stone has a set of guidelines that ensures employees are interacting correctly, and that quality standards continue through their social media departments. This might make them sound stuffy, but the result is the exact opposite. Instead of only allowing a single “Customer Success Representative” to speak for the company online, we see other employees engaging in interesting, useful conversations. They come across as well-spoken and professional, but they’re real people.

Social Media is an Extension of Their Product
Rather than simply providing a place where users learn about the product, Rosetta Stone took a social approach to language learning and created an environment where users actually learn the product.

It would be easy for Rosetta Stone to post a “word of the day” and a few grammar tips on Twitter, but that’s not their product, and it’s not engaging. By nature, language is social and Rosetta Stone knows it.

To enhance their education, they’ve created online communities where users chat live with native speakers and interact and play games with other learners. They have a photo booth where you appear in a foreign land and have your photo automatically transferred to Facebook. On Twitter, Rosetta Stone answers questions, offers words of encouragement and even hosts chat sessions that ease students’ nerves. On Facebook, users discuss everything from technical issues to language suggestions to who’s studying what and why.

Last week on their Facebook page, they posted a picture of an orange square and asked their audience, “how would you describe this colour in the language you’re learning?” At the time of writing, the question had 96 responses in a vast array of languages. This is a perfect example of how Rosetta Stone uses their social media presence to not only engage their audience, but supply the community support to language learners to fall back on.

They Write Back to You
It might sound simple, but Rosetta Stone actually responds to comments, both good and bad. And they’re speedy. One guy posted a negative experience, and within the day Rosetta Stone sent him a private message and he publicly posted how the issue was resolved.
Rosetta Stone even actively participates in a Facebook discussion devoted entirely to “What don’t you like about Rosetta Stone.”

Although accepting and taking responsibility is something Rosetta Stone does very, very well, they don’t take over conversations. A lot of people have mixed feelings about buying the program, but rather than pushing their product, Rosetta Stone lets other customers take the lead. More often than not, a simple recommendation squashes all doubts.

In response to Rosetta Stone’s “What time is it in the country whose language you’re learning” questions, a user asked all Rosetta Stone Employees: “What language are you learning and why?” Almost 15 employees responded, all with personal, human answers that made me want to be their friend. If that’s not social media engagement, then I don’t know what is. 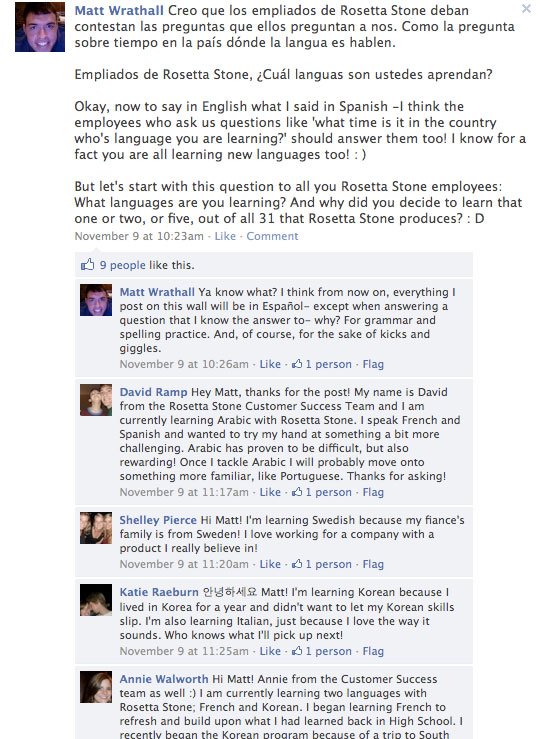