Using real Lego bricks, Life of George tests your ability to build small models with speed and accuracy. It’s like the classic 80s game Perfection, but minus the sweaty, panicky feeling. The game features 12 levels of varying difficulty, during which you must recreate the models shown within the app. When you’re done, you place your creation on a special “green screen” type mat and take a photo with your iPhone. Using EyeCue-enabled technology, the app then gives you a score based on your building speed and accuracy. Once you successfully unlock 10 items, you move up to the next level. And when you get tired of recreating, you can go into “Creation Mode” and build whatever you want.

Life of George isn’t just a nerdy sit-at-home-and-play-lego-while-your-friends-are-at-the-bar kind of game. You can play head-to-head with someone else and in the future you’ll be able to place your unique designs in the game and share them via Facebook. The current designs don’t look particularly difficult, so it would be nice to throw some crazier models into the mix. Maybe even 3-D designs one day?

If you’re wondering who George is, he’s a software engineer who loves travel, photography, numbers and the word “awesome.” He’s also fictional, but after reading his Facebook page you won’t care. His travel album is more interesting that most real ones and his status updates are an amusing countdown to the product’s launch, which happens on October 1st.

I was really disappointed by Lego’s video games—I didn’t try them out or anything, but their very existence upset me, probably because there were no physical blocks involved. So I’m very happy to hear that Lego found a way to bring its core idea into the technological era for only $29.99. Bravo. Check out the vid and be amazed: 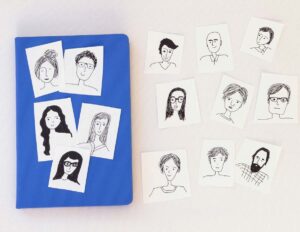