Cloud Computing Explained (in the Most Basic Terms Possible) 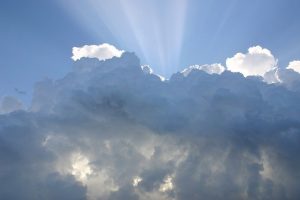 If you think Cloud computing is something smart Care Bears do, you’re not alone. To get you in the loop, here’s some basic info on what it’s all about. Yaaaaaaay cloud.

In the simplest terms possible, Cloud computing is like making your friend carry your books to class. You have everything you need at your disposal, but someone else is carrying the heavy load for you.

Cloud computing allows you to store your data and software on remote servers instead of on your computer, so you can access your files from anywhere and from any computer. It lets you manage things on the internet without having to buy software, install programs, download things or make backups of your data.

Programs like Hotmail, Google Docs and Facebook all use Cloud principles, so there’s a good chance you’re using the Cloud without even knowing it.

Why is it called the Cloud?

Long, long ago, before Rebecca Black’s golden tones graced the Earth, some people were designing a network. They drew a pretty diagram of how all their network devices were controlled, connected and managed. But sometimes, their networks needed to be connected to other networks, or even the internet.

The people only understood the inner-workings of their own network, but they still needed to mention the other ones in the diagram, for clarity’s sake. To keep things simple, they created a placeholder for “complex stuff that isn’t important.” The symbol resembled a cloud, so—you guessed it—that’s what people started calling it.

Where does my stuff go?

Cloud storage sounds much more ethereal than it actually is. In reality, your stuff is stored on servers in a nerdy data building. For a large-scale example, take a look at Microsoft’s Chicago Data Center.

What if the storage place breaks, goes under or is attacked by a herd of rabid wildebeests? Will my stuff disappear?

Cloud storage is occasionally interrupted, but as far as losing data goes, you’re pretty safe. Google uses synchronous replication to store your data in two centres at once, so you’re okay even if one fails. Smaller companies aren’t as thorough, but when you think about how much data you lose when your personal computer fails, Cloud storage isn’t risky.

PrevPrevious Post10 Things You Should Know About QR Codes
Next PostExplained: Apple vs. Samsung and the Campaign Against GoogleNext