With content from our interactive media division, northStudio360, we were recently the proud winners of Social Media Campaign of the Year, presented by Social Media Camp. The award, dubbed a “Westie,” was judged on creativity, sociability and results. Here’s how it went down:

With content from our interactive media division, northStudio360, we were recently the proud winners of Social Media Campaign of the Year, presented by Social Media Camp. The award, dubbed a “Westie,” was judged on creativity, sociability and results. Here’s how it went down:

Earlier this year, northStudio360 launched an interactive online 360-degree helicopter video that changed the way people experience tourism online. To bring the destination alive, they took their 360 Video expertise to the sky, in a helicopter, and created an HD Quality 360 Virtual tour for British Columbia’s Nimmo Bay Resort. 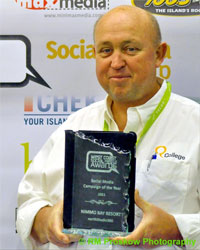 To maximize the video’s viral potential—and to allow us to engage with viewers immediately after the video’s debut—we strategically released the video over pre-determined channels that would get people talking, sharing and asking questions. The video’s viral success relied little on Facebook. Instead, we submitted the video and its informational press release to blogs in targeted tech and tourism communities, where we built awareness of the new technology and how it changes world of video for tourism. Users were so captivated by the experiential technology and its ability to give them complete control of how they viewed the stunning landscape that they were quick to engage in two-way conversations about technology, tourism and the future of 360 video.

Every viral video stems from a strong social foundation—if no one’s talking about it, it’s not worth sharing. To encourage the video’s momentum on Twitter and social news sites like Digg and Reddit, we carefully followed the many online conversations surrounding the video and joined the dialogue where appropriate, contributing valuable technical knowledge to the tech and tourism industries while at the same time spreading word of the video.

This advertising phenomenon received millions of views in its first few weeks and was picked up by Mashable, CTV, Gizmodo, Digg, Reddit and the Huffington Post, who said the video “might be the coolest thing you see… ever.”

It was exciting to watch the video attract viewers from every corner of the world, and to watch our social media campaign catch the attention of traditional media outlets. Businesses don’t need a big media budget to get noticed!

We are very pleased to have received this award and would like to thank Nimmo Bay, the northStudio360 crew, everyone who shared this video online, and of course Social Media Camp for making this possible.