Scavenger hunts are always awesome, but Starbucks just upped the awesomeness by including QR codes—and even better—Lady Gaga. Without using raw-meat bikinis or elaborate egg vessels, Starbucks found a clever way to connect their stores, their digital networks and their customers.

Scavenger hunts are always awesome, but Starbucks just upped the awesomeness by including QR codes—and even better—Lady Gaga. Without using raw-meat bikinis or elaborate egg vessels, Starbucks found a clever way to connect their stores, their digital networks and their customers.

Starting today, when customers scan in-store QR codes they’ll be transported to a web page with a set of seven clues, which will be activated at intervals over a two-week period. The digital hunt, called SRCH, will take users to various blogs and Starbucks sites and will test users with riddles, puzzles and brainteasers. Once they locate and click on the hidden SRCH card, they’ll be eligible to win prizes.

If you’re wondering how Lady Gaga fits in, the hunt coincides with the May 23 release of her Born This Way album. On that day, Starbucks will play Lady Gaga’s music in their stores and customers will be able to stream a special edition of her new album for the whole day,

Very cool. Here are some other examples of QR codes done right: 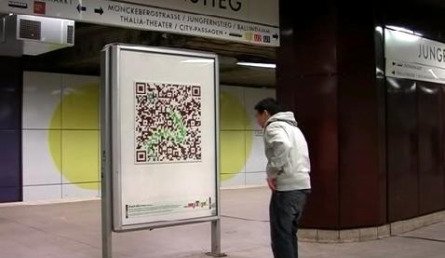 LEGO has been used to build all sorts of weird things (a pinhole camera, an air conditioner, a Volvo), but never a QR code—until Germany’s largest online toy store got their creative mitts on it. They built colourful, 3-D codes that took people to their website, where they could purchase the very bricks used to make the QR codes.

According to online tracking, 49% of all MyToy.de visitors were achieved through this campaign.

Calvin Klein ads have always been scandalous (and borderline inappropriate), but last summer they found a way to use their obscene reputation to promote their products without actually being obscene. 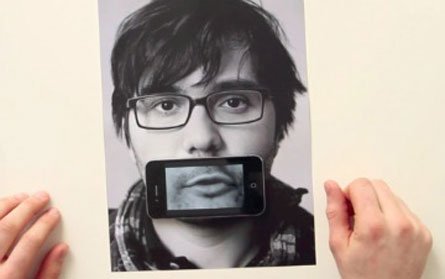 As Victor Petit showed, QR codes can also be used for shameless self-promotion. To make his resume extra spicy, he put a photo of his face on the back page, with a QR code over his mouth. When you scanned the code, a video of the missing mouth appeared

In the age of computer-generated form resumes beginning with “To Whom it May Concern,” creative submissions are a nice change. Plus, Victor was applying to a communications agency, so it made sense for his resume to be as expressive as possible.