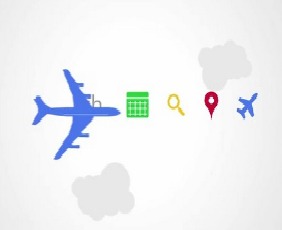 On its first day, Flight Search listed the World Trade Center as a destination airport for New York City. The Twin Towers used to have a heliport (WTC) on the roof so it’s not completely out of the blue, but it was seriously bad timing considering it was two days after the 10th anniversary of the attacks. In Google’s defense, Flight Search gets its airport codes from the International Air Transport Association and the International Civil Aviation Association, and had no idea that decommissioned airports were still in the list. Google quickly removed the WTC, but not before Flight Search was eaten alive by a bazillion negative articles. An honest, yet embarrassing, mistake.

Mechanical failure aside, Flight Search has a lot going for it. It’s easy on the eye, it has neat filters and it’s really fast, which is unusual for the airfare industry. The best thing? Click on the calendar next to your chosen dates to see a month’s worth of prices arranged in a handy bar graph. There, you can play with your dates to get the best possible deal. And if you’re an impulsive person with extra cash who wants to go on vacation asap, you can type in your starting point and view all possible destinations filtered by price and duration.

Because it’s so new, Flight Search is still very limited. You can only see it on Google.com, and it only shows economy, round-trip fares for trips between a few US cities. You can’t book directly from the site, either, which a lot of people see as an irritating waste of time. Me? I think that’s one of the biggest selling features. Regardless of where I find the cheap fare, I always book directly from the airline anyway because it makes it a lot easier to complain. Like the time I booked a flight to Kansas City and the airline thought it was okay to change my destination to Minneapolis. Without telling me. Good times.

So how will Flight Search affect sites like Kayak and Orbitz? With Flight Search’s current stripped-down state, it won’t affect them at all. But when Google adds more destinations, airlines and doodads, which it inevitably will, others travel sites should be worried.

Robert Birge, Kayak’s Chief Marketing Officer, doesn’t see Google as a problem. "We’re confident in our ability to compete, and we believe our flight search technology is superior," he said in a statement. "We recognize Google is a formidable competitor but they haven’t been successful in every vertical they’ve entered."

Although I like his usage of the word “vertical,” I think he’s just putting on a brave face. Flight Search is currently a fun way to waste time and dream of vacations you can’t afford, but it’s not long before it becomes your one-stop travel solution.