Tourism Marketing: The Drunk Guy has Good Ideas, But Social Media has a Bigger Audience

A few years ago, before Facebook walked the Earth, I spent about six months wandering around Australia. I funded my travels with random jobs along the way: I picked almonds, packed cherries, planted vineyards and made my carnie debut at the Perth Royal Show (the Lucky Laughing Clowns, to be exact).

A few years ago, before Facebook walked the Earth, I spent about six months wandering around Australia. I funded my travels with random jobs along the way: I picked almonds, packed cherries, planted vineyards and made my carnie debut at the Perth Royal Show (the Lucky Laughing Clowns, to be exact). 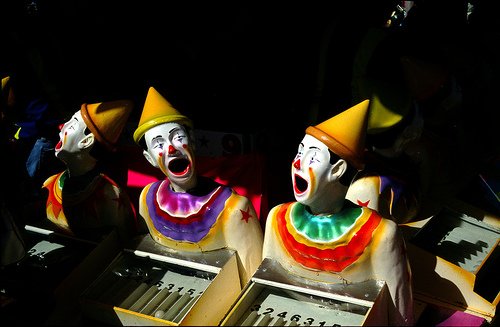 Thinking back, getting those jobs was never easy, but neither was traveling around. At that time, I only used the internet for email, so I either had to rely on my raggedy guidebook or drunken recommendations from people in my hostels, such as, “Go down to the old hotel at 5 AM and a bus will show up. A man named Cowboy will give you a job. He’s an ex-biker—you’ll know him by his tattoos.”

In his defense, Cowboy did show up give me a job planting and pruning vineyards. In those two weeks, I earned enough money to get the heck out of my ant/roach/feral cat infested trailer and travel, carefree, for over a month. So even though I got the tip from someone who spent the entire evening drinking beer and watching his skydiving video on repeat, he knew what he was talking about because he had either done it himself, or knew someone who did. It was the best tip I ever got.

Word of mouth has always been the best form of tourism marketing, but it becomes even more effective when paired with social media. When placed in a dynamic social community, it evolves into the most realistic type of marketing: experiential marketing. People need more than a simple “go there” recommendation; they need to be creatively immersed in the destination through photos, videos and descriptive text. These interactive experiences tell the story of the destination, heighten emotional decision making and create something tangible for the customer to need or want.

Take a look at Tourism Queensland’s 2009 “Best Job in the World” campaign. They created a global search for an Island Caretaker, whose job was to live on Hamilton Island for 6 months, explore the islands around the Great Barrier Reef and blog about it—all for AUD $150,000. Tourism Queensland saw over 34,000 video applicants from 197 countries, over 8 million website hits, 378,735 Facebook referrals, a 93% increase in followers and over 610 hours of user-generated content.

It’s a large-scale example, but it does show how one relatively simple idea can bring in a worldwide following, including a whopping increase in post-campaign tourism. It brought together millions of people all with the same interest in common—Tourism Queensland.

That’s the beauty of social media. People grab on to each other as much as they grab hold of a brand. In real time, they can ask questions, create discussions and upload and comment on content. For businesses, that means you can track your success as it happens, steer discussions in the desired direction and immediately respond to all comments, both good and bad.

Travel guide and tourism review sites are a very basic form of travel marketing, but they do contain valuable feedback. If I had read that my trailer would essentially be a litter box for feral cats, I probably wouldn’t have stayed there. It’s inevitable that whatever you’re looking up will have at least one horrible review, but the company’s response to the negative comment can also tell you a lot about them. If they correct the problem in a quick and friendly manner, you can usually overlook the issue. But if they fix the problem by handing you a can of Febreze, run.

Social media isn’t only good for trip planning, though. After your holiday is over, it lets you relive those travel memories, both good and bad. Even if the comments, photos and videos aren’t your own, they still transport you back to the destination, and if you’re lucky, you can sometimes spot yourself in the photos. It’s fun to see how some places look exactly as they did 10 years ago, or how they finally listened to you and moved the ping pong table indoors. But it’s even funnier to see how the most horrible slug-slimed trailer parks have transformed into chic wedding destinations.