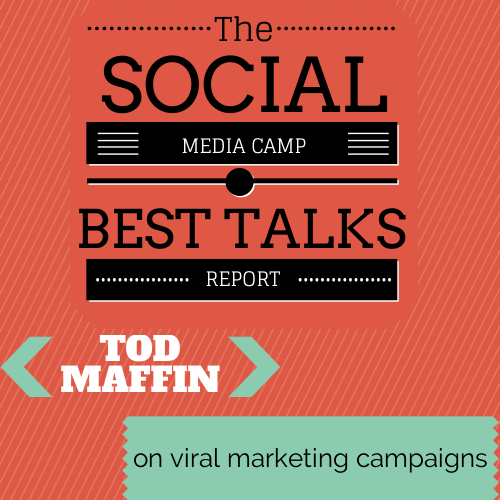 This year’s Social Media Camp wrapped up on Saturday, May 3rd, but I’m still pretty excited about everything that I heard and learned during those busy 2 days.

In our first post of the Social Media Camp Report, I’ll cover the opening keynote by Tod Maffin. It was funny and entertaining, pretty much the best way to start a conference. Mr. Maffin talked to us about the 6 elements of a viral marketing campaign with plenty of videos and examples to show us. Here’s the most important information I gathered from the talk.

Marketing is a delicate balance between finding your audience, delivering what they want and getting them to act. So matching the three is very important if you want a campaign to go viral. If one of the elements is off (like using hip hop to market to middle-aged adults, or asking teenagers to buy a product they can’t afford), then your campaign isn’t likely to be shared.

Step 2: Use a single, simple concept

Viral campaigns are usually pretty simple. There’s no complicated plot line, no deep character development. It’s dancing, or singing, or kicking a ball, or a double rainbow. Don’t overthink your concept and keep it simple.

Step 3: Use the right tone

According to Tod (and other experts), there are only 3 tones that work in viral campaigns: silly, serious and stunning. Something else might work on a smaller scale, but if you’re after viral, stick to these three.

Having a video that’s funny isn’t enough anymore–companies should offer incentives for sharing. Everyone is a little bit greedy, and it’s nice to be rewarded for our actions. Contests are great because they encourage regular and wide sharing, but make sure that the winner is chosen by your company, not by the public. Otherwise, you might end up with a Mr. Splashy Pants situation.

If you campaign goes viral, people are likely to latch unto it and make it their own. They’re going to remix it, reuse it and adapt it. The smart thing to do is embrace the movement; sending lawyers will only make people angry. You can’t control what people do, but you can certainly take advantage of the opportunities that the web’s creative freedom provides.

Be ready to have a second and third campaign to follow up on the first. Don’t let your viral campaign die from neglect; up the ante with every successive round. If you’re successful, your brand or product awareness will soar to amazing new heights.

This talk showed me that viral campaigns can be planned to a certain extent. These steps can’t guarantee a viral campaign, but they can certainly increase your odds.

If you have an idea for a viral campaign and would like help implementing it, contact us with your thoughts.