When Google announced back in April (2012) their acquisition of PostRank also meant its ultimate demise, I started a board on Quora asking what alternatives to PostRank exist for determining the relevancy of an RSS feed.

When Google announced back in April (2012) their acquisition of PostRank also meant its ultimate demise, I started a board on Quora asking what alternatives to PostRank exist for determining the relevancy of an RSS feed. The Quora board received a flurry of attention when Google Reader ended support for PostRank, including notable comments from the former Co-Editor for ReadWriteWeb, and now CEO of PlexusEngine, Marshall Kirkpatrick, who introduced me to RSS feed management as a "Social Media Cheat Sheet" in 2009.

Aside from people commenting that they are also looking for alternatives to PostRank and Google Reader, the board quieted down. I was stumped. Stuck sorting through thousands of RSS feeds of "dirty" data, counting numbers of keyword mentions and then comparing them using Google Search Trends to find posts that held relevance and value. This lasted from May until August before I finally discovered something that promised to be similar to the PostRank and Google Reader combination. The answer was in an excellent post from Smashing Magazine, by Vasilis van Gemert, entitled: The Art of Staying Up To Date. The product: Fever. 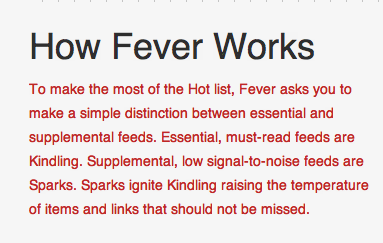 A Brief History on Why PostRank was so Awesome

PostRank integration with an RSS feed managment service, such as Google Reader, rates the activity surrounding posts on a 1-to-10 scale. How many clicks a link has received, how many comments a post had received, and social signals, like tweets and likes, were all included in the PostRank algorithm. 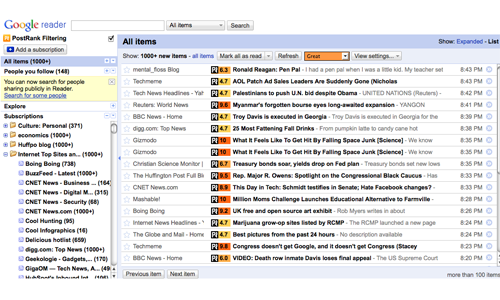 Combining factors with another layer of qualification, such as a social bookmarking network like Delicious, and you have a bird’s eye view of breaking blog buzz and emerging trends. This data can be used for new-jacking, tracking keyword trends and evaluating reasons for stock market fluctuations. But, as in any maturing system, independent (localized) tools always succumb to the (regional) control of a larger entity. 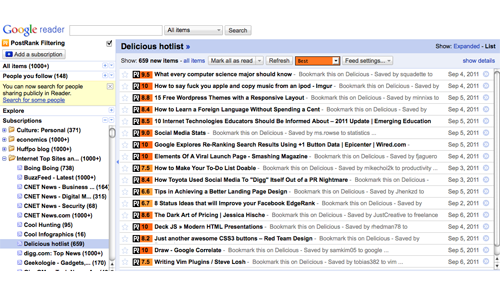 So, on May 1, 2012, the Montreal start-up that was known as PostRank was absorbed into the Borg that is Google Inc. Back on the Quora Board, I posted about the promise of Fever to offer similar capabilities as Google Reader incorporated with Postrank. A few days later, one of the people following the board, Steve Wiildeman, aka SEOSteve, uploaded a Screencast  of him setting up Fever and offered to let me use his membership and give it a go. Yet, another reason Quora is the best social collaboration tool I have ever used.

With Google Reader, probably the most popular web-based RSS aggregator, the way to organize topics is with folders, because some feeds publish more often than others. Without folders, all you’d see in your unsorted "all items" feed are the feeds from over-performing link-aggregators, social bookmarking sites and forums. The way to find coverage on a specific topic in Google Reader is through searching for the keyword and then scanning the results. The process of sorting through these feeds, without a qualifying system like PostRank, is very time-intensive and returns mediocre results, but they are better results than a straight search of the garbage dump that is a Google search. With Fever, feeds are ranked on a temperature scale as "Hot" topics. 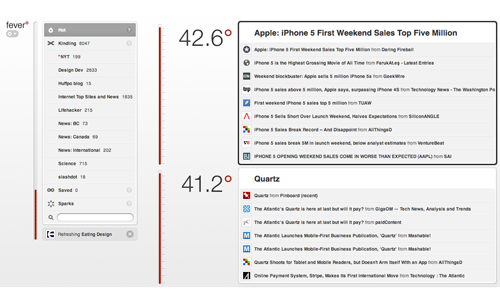 Hot topics have one heading and below are all of the articles, including those from social bookmarking sites and news-aggregator sites. The Hot list feature saves sorting and searching for top stories and gives an overview at a glance of the hottest topic of the moment or from a customizable time period.

Fever solves the problem of dealing with the quantity of data in our daily lives.

Fever prompts you to make a distinction between essential and supplemental feeds. There’s a drag and drop feed organization feature for manually sorting your feeds—a major selling point for any data manager, and a massive time saver if you have a large number of feeds. The OPML file I imported contained 527 feeds in 7 folders as my test sample, or about a fifth of my feeds from Google Reader. All of the imported feeds and folders are by default imported into the "essential reading" Kindling list.

The Sparks list is where you are prompted to import your "inessential" feeds. According to Fever’s demo video, what classifies as an inessential feed is one that is high-volume. These Spark feeds are claimed to feed the Hot List, however I noticed no difference in my Hot list whether my high-volume feeds were in the Sparks list or the Kindling group list. 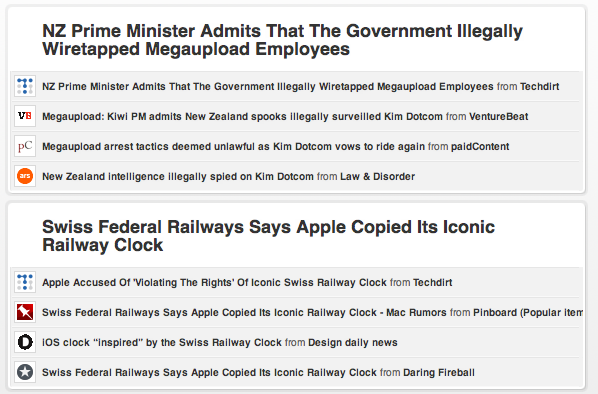 Fever turns information-clutter into meaningful and understandable stories connected from across the web.

Overall, Fever is a must have tool for anyone working in news production, digital communications, social media or any other industry that depends on breaking news and trends (I am curious as to how a stock market broker or investment portfolio manager could benefit their clients by using Fever for research and recognizance). Fever fills the qualification gap PostRank left, and provides a service for researchers and reporters worth much more than the $30 cost, and whatever the cost of hosting the service is for you.

Having been released in 2008 Fever isn’t a new service; however, Fever, by Shaun Inman, is a simple way to add value to your online networks and create an intellegence engine for tapping into blog buzz similar to the PostRank method introduced by Kirkpatrick for RWW. If you’ve been missing PostRank in your aggregated RSS feed reader, or looking for a way to make a poweful social media cheat sheet, check out Fever.