It’s always an interesting time in the digital marketing and SEO industries when Google rolls out algorithm updates. Professionals get all abuzz on social media and blogs, everyone begins to search for information on the update, and then we check our own metrics and our client metrics. Sometimes Google tells us when they are rolling out these updates, but more often we are kept in the dark.

This week, Google has confirmed that they have rolled out two webspam algorithm updates: Pay Day 2.0, and Panda 4.0.

"Do you know what today is [spammy websites]? Payday.” Okay, that might not be the thought behind the naming of the algorithm update (I’ll explain the reason below), but it actually works. Google is essentially giving a little payback to spammy areas of the web. 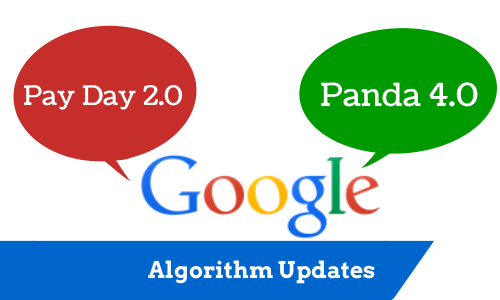 Search Engine Land was among the first to post an update confirming that Google had indeed rolled out an update to their Pay Day 2.0 algorithm update. They stated a Google spokesperson told them:

Over the weekend we began rolling out a new algorithmic update. The update was neither Panda nor Penguin — it was the next generation of an algorithm that originally rolled out last summer for very spammy queries.

This past weekend we started rolling out a ranking update for very spammy queries: http://t.co/NpUZRqpnBI

The first Payday Loan update started to roll out around June 11th 2013. Both Pay Day updates target niche spammy areas of the web. Google specifically mentioned that the keywords around payday loans and porn-related keywords would be targeted. It should only affect a small percentage of websites, but we will keep our eyes peeled for more affected keywords.

Google is rolling out our Panda 4.0 update starting today.

The Panda algorithm update first rolled out in February 2011. Since then, there have been dozens of updates to it. This algorithm targets on-page issues such as thin content, content farms, and other content quality metrics. More than ever, Google emphasizes clear, relevant and original content written by experts; this is the time to rethink your approach to content production to ensure that you follow Google's guidelines and produce the type of content that attracts good rankings.

Some previous updates have been on 10-day roll outs, so we'll keep an eye for any changes in our metrics and our clients'.

Are you curious about more algorithm updates? Moz has a good record of Googles Algorithm change history.