If you thought The Social Network was the ultimate blend of film and Facebook, think again. Toshiba and Intel have paired with Hollywood A-listers to create a blockbuster-style thriller that you, the consumer, can control.

If you thought The Social Network was the ultimate blend of film and Facebook, think again. Toshiba and Intel have paired with Hollywood A-listers to create a blockbuster-style thriller that you, the consumer, can control.

I say “consumer” because the film is actually a fabulous advertisement for the new Toshiba Satellite P775, but that fact is easily lost in the film’s awesomeness. This isn’t a crummy slap-together project—it has a snazzy movie poster and features legit names like actor Emmy Rossum (Phantom of the Opera), director D.J. Caruso (Disturbia) and cinematographer Mauro Fiore (Avatar). 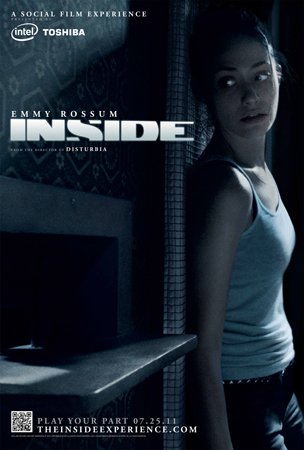 Rossum stars as Christina, a woman trapped in a room with nothing but a trusty laptop and an untraceable internet connection. She has no idea where she is or why she’s being held captive, but she’s able to access her social networks to reach out to friends, family and potentially-helpful strangers who want to figure out her situation. It’s never revealed why Christina gets to tinker on laptop (so she can fend off boredom by Googling puppies maybe?), but luckily the trailer shows a power cord. The only thing more frustrating than being trapped in a room is being trapped in a room with a dead computer.

To help the poor girl out, consumers will play the part of her social network. After the first film clip is revealed on July 25th, they can affect the plot by tweeting tips and clues and by posting advice on her Facebook wall. Think of it as socially acceptable way to freak out in public and tell a character she’s making lame choices, only this time she might listen to you.

The posts that best fit the storyline will be incorporated into the episodes by being superimposed—that’s probably not the proper technical term nowadays but whatever—onto Rossum’s computer screen. And until July 20th, viewers can audition on YouTube to win a cameo (again, on the computer screen). The film will air in short episodes, with all of the bits edited togehter and released in full form at a later date.

That’s pretty cool considering your credit will be listed next to people who actually have a (good) Hollywood reputation. No, you will not get to meet these fine people, but your name will almost touch their name. Close enough.

Toshiba’s goal here is to connect with youngsters on their own turf. It has the cool “what’s going to happen?” feel that everyone loves regardless of their age (like the Doritos Write the End campaign had), and viewers will have the chance to have their social identity leave a mark in a film that’s first of its kind. I’m not sure if viewers will see beyond the film and remember it’s an advertisement, but it’s a clever idea that will undoubtedly spawn all kinds of neat film campaigns.