Pigs steal eggs, birds seek revenge. This barnyard scandal sounds like a lame premise for a mobile game, but the explosive success of Angry Birds proves it’s exactly what the world needs.

Pigs steal eggs, birds seek revenge. This barnyard scandal sounds like a lame premise for a mobile game, but the explosive success of Angry Birds proves it’s exactly what the world needs. 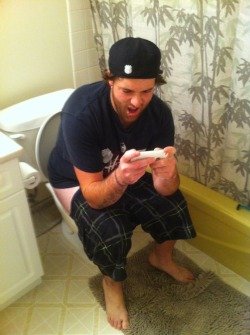 That’s right, the total marketing budget to date is zilch. Angry Birds is propelled by user engagement, not advertisements, which Stalbow says is a direct result of treating Angry Birds like a service, not a product. The frequent updates build direct connections with fans and keep them entertained, addicted and stoked for the next big release (including the official Angry Birds cookbook).

To help you better understand the inner workings of these die-hard fanatics, we tracked down Mason Wall, a local Angry Birds whisperer who was more than happy to share his secrets and a photograph of himself playing Angry Birds on the toilet.

When did you start playing Angry Birds?
November, 2010.

What’s your rank?
It changes every minute, but at one point I was in the top 4000.

How many hours do you spend playing each day?
There haven’t been updates in a while and I have 3 stars on every level, but I’d say about 3 to 4 hours every day.

Why do you play Angry Birds so much?
I’m kind of a perfectionist. I like to make sure every level is beaten with 3 stars.

Does Angry Birds affect your life?
No, but I dream about it sometimes. I dream that I’m getting fired out of a slingshot.

Do you ever get yelled at for playing too much Angry Birds?
All the time. I have to sneak it in or my girlfriend yells at me.

Have you ever faked a bathroom trip to play Angry Birds?
Yes.

How else do you sneak it in?
There will always be Angry Birds in the bathroom, but iPhones make it easy to look like you’re doing something else when you’re actually playing Angry Birds. You need a quick thumb so you can multitask. I also play a lot of it at work while I’m traveling. When I first downloaded Angry Birds it came with almost all the levels, and during a drive from northern Alberta to Victoria I had the game beat by the time we got to Kamloops. I was the passenger, not the driver.

Tell me about your wrist injury. How does it affect your Angry Birds lifestyle?
I have to play with a finger now instead of my thumb. It’s a bit trickier but it works out.

Is Angry Birds a lifestyle?
Not for me. For some people I’m sure it is.

Have you ever lost a job/girlfriend/living arrangement due to Angry Birds?
No, never.

What’s the hardest thing you’ve done?
Get 3 stars on every single level.

If you could be any Angry Bird, which Angry Bird would you be and why?
I like the bomb bird because it destroys everything in sight.

What did you learn that made the biggest difference in your game?
To hit reset a millisecond after if the shot’s not perfect.

What’s your biggest tip for newbies?
Practice your aim and learn how the birds fly and how they separate when you touch the screen.

What are five things every Angry Birder should know?
It’s not easy. Practice hard. The pigs are evil.

What gives some people the Angry Birds edge?
Commitment. Playing the same level, the same shot for hours.

Why are you so much better than the average Angry Birder?
I guess I just enjoy the game and play it all the time. A monkey could do it if they played enough.

Are you going as an Angry Bird for Halloween?
No. I’m not that much of a freakshow.

If you had children, would you dress them up as Angry Birds?
I wouldn’t be opposed.

Do you own any Angry Bird merchandise?
No, but I want to get my hands on those flipflops someday.

What are your hopes for Angry Birds’ future?
A new level every month.

Out of everyone you know, are you the best?
By far.