Everyone loves a good statistic. Facebook users create 3.2 billion likes and comments every day. Only 5% of online adults use Tumblr. There is a 33% chance that a peanut grown in the U.S. will end up as peanut butter.

Fascinating stats. But can you trust them?

Everyone loves a good statistic. Facebook users create 3.2 billion likes and comments every day. Only 5% of online adults use Tumblr. There is a 33% chance that a peanut grown in the U.S. will end up as peanut butter.

Fascinating stats. But can you trust them?

The problem with finding statistics online is that they’ve often been subjected to a global game of telephone: a number mistyped here, some context lost there. By the time it reaches you, the statistic has lost all meaning and you have have no idea where it came from.

Case in point: A little something I like to call the Statistical Wheel of Hell.

The other day, I received an email from someone who wanted to quote a particular stat from Stikky’s 2012 Social Media and Tourism Industry statistics blog, but they couldn’t find its source in the source list. Thinking I had forgotten to include it, I Googled the stat to double-check it where it came from.

That’s when things got interesting.

In case you didn’t get that, here’s a visual: 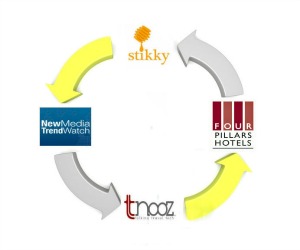 In my defense, I did correctly link the stat to its real source, the World Travel Market 2011 Industry Report. But as for crediting Stikky Media as a source and therefore perpetuating the Statistical Wheel of Hell, well, there’s really no excuse.

Here are a few ways to find the REAL source of a stat:

Most people who post stats take them word for word from the original source, which is useful when it comes to tracking down where it came from. Do an exact search of the sentence/phrase, comb through the results and only click on sites that look legitimate. And by legitimate, I don’t mean “50 Totally Rad Social Media Stats 4 U.” I mean whitepapers, reports, studies, PDFs and things with dates in the title (January 2012, for example).

Look for keywords and key phrases

Most companies who post first generation stats will preface them with official sounding phrases, like “conducted a survey of,” “study of,” “conducted between” or “new study.” Adding in these key phrases to your search will help you hone in on the original source.

If you come across an amazing statistic that’s one-of-a-kind and perfect in every way, don’t hesitate to email the author and ask where the heck they got it. Either a) They’ll happily lead you in the right direction, b) They’ll have no idea, but are so embarrassed that they’ll search out the source themselves and get back to you, or c) They won’t get back to you at all. If you don’t hear back, find an alternative stat.

If it’s something basic, like “Facebook has x million users” or “Twitter users post x status updates per second,” then go right to the obvious source. Chances are you’ll find a more current stat. Here are some quick links to get you started:

The official Twitter stats are a bit trickier to find, but Twitter occasionally posts numbers in their blog (usually on their birthday) or announces them at social media conferences.

Final words to live by: If you don’t know the source, don’t use the stat. Better no stat at all than to contribute to the interweb’s bottomless cesspool of useless numbers.