Google Hotel Finder is something I wished I knew about two weeks ago, when I attempted to book a room in Seattle during the weekend of two Red Sox/Mariners games, an Adele concert and a Tattoo Expo.

Google Hotel Finder is something I wished I knew about two weeks ago, when I attempted to book a room in Seattle during the weekend of two Red Sox/Mariners games, an Adele concert and a Tattoo Expo. It took me two hours to weed through the no vacancies, the drug motels and the executive suites before I finally found what appeared to the last normal room in the city. Not amused. 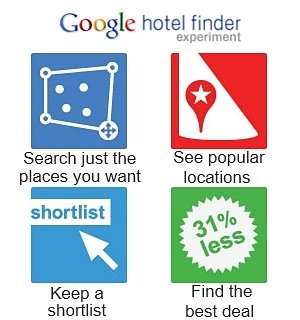 Before you make fun of my lame Googling skills, you should know that I am an excellent Googler. One of the best, actually. It’s just that I every time I told whatever website I was using that I wanted a cheap-ish hotel in downtown Seattle, it always gave me a lovely selection of sketch motels in a neighbourhood where I once witnessed a gang fight on a city bus. Even on megasites like Kayak that have maps, I still had to go back and forth between websites to get a good sense of the hotel (and to make sure I wouldn’t have to commute on a gang bus).

Enter: Google Hotel Finder. It’s still in experimental phase, but it’s pretty darn awesome. It’s not overloaded with ads (yet), it’s the easiest site of its kind to use and it’s integrated with Google Maps and Google Places, so you can get all of Google’s stalker-like info in one handy place. It shows Google reviews first, of course, but it also links directly to TripAdvisor, TravelPod and Hotels.com so you can cyber-sleuth your way to a good night’s sleep.

The best thing about Google Hotel Finder is that you can change the shape of your search area to focus in on exact neighbourhoods and eliminate everything in between. You can add multiple search areas, and once you’ve narrowed it down, Google won’t tease you/waste your time by adding cheap out-of-area hotels. Plus, you will always get a good deal because you can filter results by price, discounts, class and user ratings, as well as compare historical pricing data to current listed prices.

Google Hotel Finder isn’t the most innovative thing in the world, but as Google loves do to, they’ve put their own spin on the idea and made it cleaner, faster and more fun to use. If it’s this great so early on, I can’t wait to see what they add on next. Flights please!