Here’s another scary Facebook stat: people love tagging more than they love being tagged. This particular fact has no scientific basis, but you and I both know it’s true.

Here’s another scary Facebook stat: people love tagging more than they love being tagged. This particular fact has no scientific basis, but you and I both know it’s true.

When you’re the tagger, not the tag-ee, you can “control” the embarrassing situations, the triple-chin closeups and any evidence of you ditching your friend’s bachelorette party to go play Catan. Yes, your photo will still be all over Facebook, but at least your name won’t be associated with it. When a photo’s not tagged, it’s a lot harder to find. You can pretend it doesn’t exist, or even enter a state of denial where you believe people won’t recognize you because you “don’t look that bad in real life.” 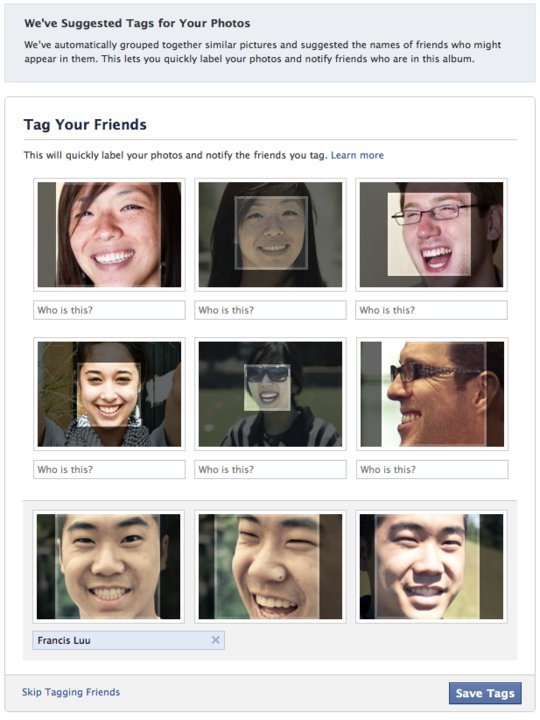 Back in December, Facebook announced its latest tagging tool: tag suggestions, which is supposed to make tagging multiple photos even more convenient. So far it’s only available to users in the United States, but if you check your privacy settings it’s there, cloaked in grey font, waiting to be abused by scores of tag-happy friends.

Here’s how it works: Facebook groups together photos of you and suggests your name. So instead of manually tagging you 168 times in someone’s wedding album, for example, your friend will only have to click once. Like manual tagging, you’ll receive notification, but you’ll still have to untag yourself—168 times. You can turn off tag suggestions, but you should know that once it’s made available to you, it’ll be turned on without notice.

Facebook uses facial recognition technology (similar to those used in photo editing tools) to help people tag en masse. Every face is made up of unique peaks and valleys—about 80 nodal points in total. The software uses the points to make measurements, like the distance between eyes, the shape of cheekbones and the length of the jaw line, which then become a “faceprint.”

Facial recognition isn’t 100% accurate, though. The site says it only makes “highly confident suggestions,” but changes in lighting and facial expressions or angles can lead to incorrect tagging.

Facebook says tagging is “an easy way to share photos and memories,” which I can’t argue with. But tag suggestions take away what little human decency is left in Facebook photos. Not only is your every move plastered across the website, but now friends can tag each and every photo of you without thinking, “Hmmm…this is hilarious photo, but so-and-so looks like garbage and will be horribly embarrassed by it. Maybe I shouldn’t tag it.”

I know I can just turn off tag suggestions, but it’s the principle behind it. Settings that take away your rights to privacy should be “opt-in,” not “opt-out.”