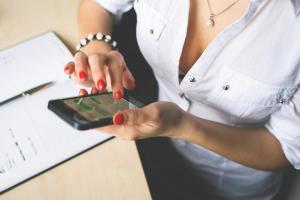 Don’t worry, there won’t be any “not safe for work” photos in this post. But one day or other, we have to talk about this rather controversial topic: the use of sexy pictures to sell stuff on the internet.

It’s almost cliché to say that sex sells. Brands and companies have used sexualized pictures to sell all sorts of things, from cars to shoes to handbags to ties, to name just a few. And of course, the internet isn’t immune to this. I’ve seen ads with scantily-clad women to advertise things as diverse as online games, content milling companies and even post-secondary education programs. No joke, I swear!

As a person who believes that women shouldn’t be objectified to sell merchandise, this type of strategy is pretty offensive and is likely to put me off right away. But whether or not that’s the case for you too, it doesn’t really matter: research shows that using sexualized images of women reduces support for ethical campaigns. This other piece of research describes how sexualized ads only work if what you sell is expensive.

So what’s the problem with using cleavage in your ads? Let’s have a closer look.

Sexy pictures bring clicks… but that’s about it

Sexy pictures attract the eye and the mouse cursor. They have amazing click-through rates and will bring lots of visitors to your website. But this sudden increase in visitors (and I’m calling them “visitors” for a reason) will not give you what you want.

First, those visitors rarely convert. Using sexy pictures to sell unrelated products (more on that later) feels a little bit like misleading advertisement. It’s like clicking on a delicious-looking hamburger only to be sold… pretty much anything that isn’t a hamburger. It’s frustrating and disappointing. It’s the old switcheroo, and it doesn’t work. Your click-through rate will be high, but your conversion rate will be low.

And that’s not the only thing. Because you will have lots of clicks, your campaign will probably cost you a lot of money. But if visitors don’t convert, this money will basically be wasted. Each click that doesn’t convert is a couple of cents (or dollars) poured down the sink.

Here’s another possible problem: your ad may be flagged as inappropriate or offensive, causing you a lot of trouble down the road. It hurts your reputation not only as an advertiser, but also as a company and a brand. And should your ad mishap make it viral on Twitter and Facebook, the damage to your brand can be devastating.

Sexy clicks can be effective… sometimes

However, the world of sexy Facebook ads and display network campaigns isn’t always that wasteful. There are two cases where it works well: if you actually sell sexy pictures, or if it’s already a part of your brand.

If your business is selling sexy pictures and related products, then do go ahead and use them for your campaigns. At least the advertisement will be truthful. You will reach your target audience effectively and provide an ad that will appeal to them.

However, you also run the risk of getting your ad flagged, so choosing the network and your audience carefully and following its rules to the letter will prevent a forceful removal of your advertising. Not all networks allow advertising for adult products, so make sure you get the right information before giving your credit card number away. 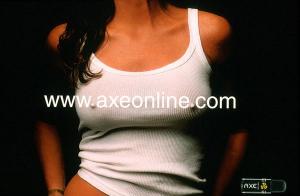 It’s also okay to use sexy photos if it’s a well-known and expected part of your brand. For example, I would expect an Axe ad to show some cleavage. Not that they’re particularly original or thoughtful ads, but at least they’re consistent. (Things may be changing for future Axe advertising though, according to this New York Times piece.)

Choosing the most effective picture for your campaign

“But if I can’t use photos of scantily-clad women to sell my stuff, what in the world can I do?” I’m glad you asked!

You can do so much that’s original, surprising and unexpected. You can take a picture of your product being used in an unexpected situation. You can use a well-made logo and call to action that informs and converts. You can link to a funny video featuring your company mascot. You can do lots of stuff that will work better, attract the kinds of clicks you want and, most importantly, you can actually convert visitors into qualified leads and clients.

Here are three things to consider when choosing your ad graphic or picture for an ad:

With these questions in mind, you’ll be able to build an attractive, relevant and convertible visual advertising campaign on Facebook, Pinterest (yes, it now has a paid ad feature in beta testing) or the Google Display Network. As long as you fulfill the promise on your landing page, you’ll bring in clicks that will happily convert further down your sales funnel.

What’s your take on sexy advertising? Do they catch your attention or do you glaze over them? Or maybe they make you angry? Share your thoughts with us!