An Afternoon on the Adventuress – Victoria Tall Ships 2011

Before we boarded, the crew made everyone put away their cell phones—it’s a technology-free zone, even for adults—then divided the teenagers into watch groups, which they got to name themselves. They came up with really weird names (like only teenagers can do), but they were amazing: Alpha Wolf Pack, Little Champs, Savage Sea Hugs, West Coast Otters and Purple Fly Kicks (or Purple Flying Kittens, as Simon thought they were called). 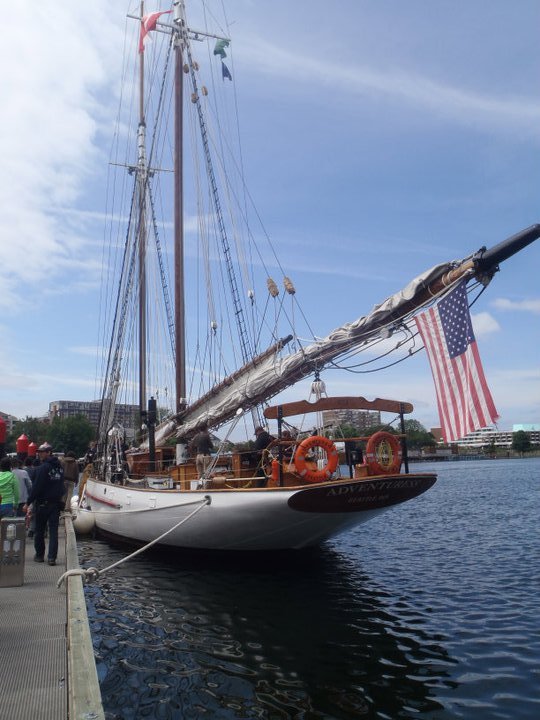 Once everyone was sorted and on board, the Adventuress slowly motored out of the harbour, seaplanes buzzing overhead. The Adventuress is impressive, so it’s no wonder everyone on shore stopped what they were doing to watch us pass by, even without our sails set. She’s 133 feet long, with 110-foot rigging and 7 sails. The mainsail is one of the biggest in North America, covering 3000 square feet and weighing 3000 lbs—as much as a small car (or one-fortieth of a bowhead whale, but I’ll get to that later).

As we made our way through the harbour, the crew told the story of the Adventuress, which is far more interesting than anything I ever learned in school. In 1913, John Borden, founder of the Chicago Yellow Cab Company, purchased the Adventuress. He, along with Roy Chapman Andrews (the real Indiana Jones!), took her on a maiden voyage from its home in Maine, through the Straits of Magellan, and up to the Arctic.

Why so far, you ask? Well, the Museum of Natural history wanted to obtain a bowhead whale specimen to round out their whale exhibit, even though bowheads were endangered. Nowadays, that’s a big no-no. Borden and Andrews never found a specimen, but Andrews did take some of the first footage ever of fur seals, resulting in a hunting ban for the next 5 years. The Adventuress’ expedition is probably the reason why fur seals are still around today.

Shorty after, for unknown reasons, Borden sold the Adventuress. For the next 60 years, she went from being a de-rigged working boat to a WWII Coast Guard boat to a beached party spot that was accidentally set on fire. The ship was sunk to put it out, then brought back up (if you’re on the ship, you can touch two original beams blackened by the fire).

In the 1970s, she finally fell into loving, caring hands. The Adventuress was fully restored and transformed into a floating classroom, where questions like “Can I drive the ship?” are always answered with an enthusiastic “Yes!”

Not only did we “drive” the boat, we raised the sails, sang sea shanties and almost fell overboard—oh wait, that was me. I tripped on an enormous white cleat and almost bailed over the side of the heeling ship. Nobody noticed but Simon. Did I mention it was windy?

And because the Adventuress is an environmentally-minded vessel, we learned about the local ecosystem. We scooped a small container of ocean water and viewed plankton under a microscope. Who knew that’s what baby crabs look like? We learned about watersheds and how polluted water travels into our rivers, lakes and oceans. We held a giant chunk of baleen and the teeth of sperm whales and orcas.

I’ve never seen baleen before, so I’m sorry if I hogged it. I even took a gratuitous photo that I like to call “Baleen on the Horizon.”

When it was time head in, it felt like only 20 minutes had passed. I could have spent all day zipping about the ocean, but alas, it was time to go home. And by go home, I mean head to my computer and research the life cycle of crabs, then stalk the Adventuress’ website to see when she’ll be back town.

Thanks to the Adventuress crew and the Victoria Tall Ships Society for such an amazing day!